The Spanish tortilla is considered on of Spain’s national dishes. This simple four ingredient recipe is sure to transport you back to the Iberian homeland.

If you are a fan of authentic Spanish food then you have surely tried the classic Spanish tortilla. No, this isn’t a flat piece of dough in which to wrap a burrito. A Spanish tortilla is simply a potato omelette. Of course, like any traditional recipe there are going to be very contentious arguments about what should go inside this delicious anytime meal.

A Spanish omelette has two main ingredients: potato and egg. It is also accepted to use olive oil and salt. However the real discourse begins with the onion. Asking a group of Spaniards if an authentic Spanish omelette has onion in it is a great way to start an argument (I suggest you do it over drinks and tapas).

How To Make A Traditional Spanish Omelette (Tortilla)

The best way to make a Spanish omelette is always the way you prefer to eat it. However for the sake of this recipe I am going to stick to making the most simple version of this delicious dish.

6 large Eggs – you can use more or less eggs, it really just depends on the size of your pan. You want the total volume of eggs and potato to fill up at least halfway of the pan.

2 Potatoes – I am using two small-medium potatoes, as you can see by the photo. You can use one large one if you like. Try to use a waxy potato as they taste deliciously creamy in the final omelette.

3-4 tbsp Olive Oil – more if needed. Potatoes absorb a lot of olive oil so do not skimp on this ingredient.

1/2 tsp Salt – adjust to taste. You can taste the egg mix before cooking but if you are not a fan of eating raw egg then just expect a bit of trial and error. I find a 1/2 tsp to be a good amount, but if you like salty food then you can always increase it.

Peel and slice your potato(s) into thin rounds. You don’t want them to be paper thin as they will burn, but use your best judgement.

Add oil to your pan and put it on low heat. Add the potatoes and cook until soft. Move the potatoes around often so they do not stick in one spot and burn – we don’t want browned potatoes in this dish. If the potatoes break up a bit as you cook them it is okay.

Beat your eggs together with the salt and then add in the cooked potatoes. Pour the mix right back into the pan. Remember to keep the heat low; my setting on the induction cooktop was at 2/10. Shake the pan so the egg gets all in between the potatoes and they even out.

Place a lid over the pan. This will essentially steam the eggs and give the final Spanish tortilla some airy volume. Don’t move the pan and let the egg and potato mix cook for about 5 minutes, or until the top looks just barely set.

Run a wooden spatula around the edge of the pan and jostle the pan a bit so the tortilla is not stuck to the pan. This might be a little difficult to get right at first, but it’s pretty easy after a few tries.

Next place a plate on top of the tortilla. In one fluid motion flip the pan and plate and slide the omelette back into the pan. This move intimidates a lot of first time Spanish tortilla cooks, but it’s actually quite fun to do once you get the hang of it.

Shake the pan in a bit of a circular motion to round the outside of the tortilla and give it a nice even edge. Place the lid back on and cook for another 5 minutes at very low heat. Then slide off the pan onto a plate, cut into wedges, and serve!

○ If you want the tortilla to be less runny then cook for a few more minutes per side. In Spain it is common to get the egg fully set, but many people actually prefer a runny tortilla and there are nationwide competitions to showcase the best Spanish tortilla cooks.

○ If you do want to add onion (¡gasp!) then add it to the potatoes when you cook them. Just like with the potatoes, you do not want them to brown.

○ The pan is important! Try to find a pan with less angled walls. Otherwise you will have a tortilla with a bit of a flared edge.

What Is The Difference Between A Spanish And Mexican Tortilla?

While they both have the same name, a Spanish tortilla and a Mexican tortilla are completely different.

The Spanish tortilla is a pan cooked omelette of eggs and potatoes whereas a Mexican tortilla is a flatbread made from cornflour or wheatflour.

How To Eat A Spanish Tortilla

The beloved Spanish tortilla can be eaten for breakfast, lunch, or dinner. It is often served as a tapa (small plate you get with a drink) or pinchos (bit of food served atop bread, popular in Barcelona). 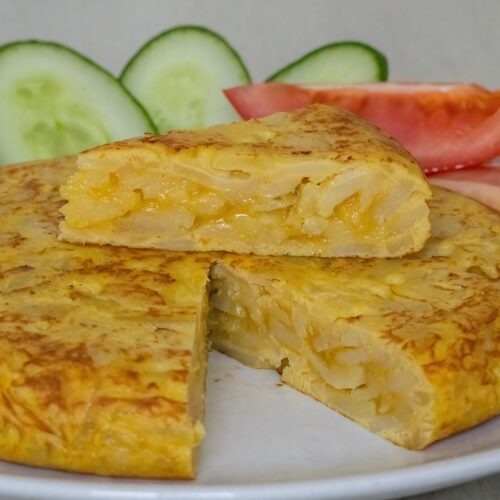 If you prefer a more firm set egg then cook each side a minute or two longer. The runniness level is entirely up to you, so cook it as long as you like.

Calories: 193kcal
Did you make this?Mention @CookingToEntertain or tag #cookingtoentertain and let me know how it was! 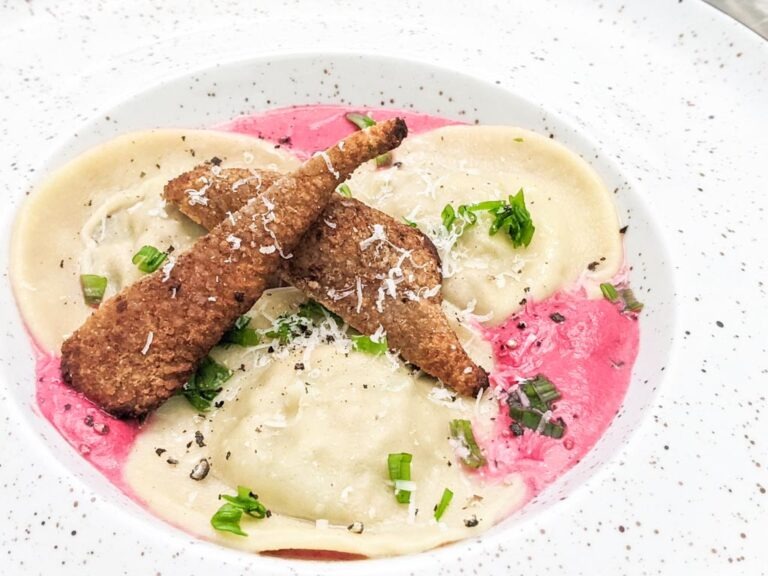 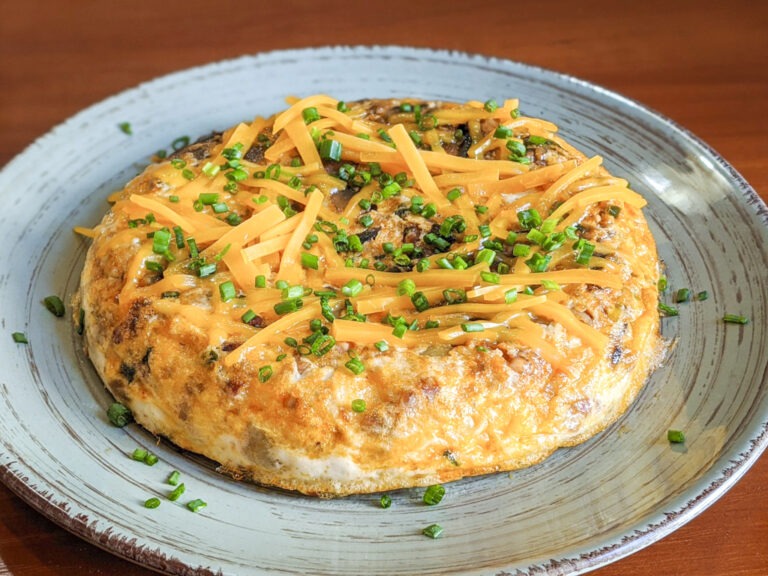