One of the lesser known but very delicious traditional Ukrainian recipes is ‘Deruny in Horschchyk’ (Деруни в горщику), or potato pancakes in claypot. This basically takes your standard Eastern European potato pancake recipe, stacks them with a delicious mushroom sauce, and bakes it all in the oven.

Traditional Ukrainian recipes are more often than not heavy comfort foods. This hutsul recipe is no exception. The mushroom sauce is super simple to make, so often this potato pancakes in claypot recipe is a way to use up leftover pancakes from the day before.

How To Make Potato Pancakes

I already have a straightforward deruny recipe on the blog, but I will repost it here so you don’t have to go jumping around the site.

600 grams Potatoes – peeled and rinsed. I am using regular russet potatoes because they have a good consistency when grated into the pancakes.

3 tbsp Flour – feel free to adjust depending on how moist the mix is. If it looks more runny than my picture down below, then just add another tbsp as needed.

200 grams Yellow Onion – This is about one medium-large onion. As you can see in the photo I used two, but just look how small they are.

Start by peeling and rinsing your potatoes. To prevent them from browning, place them in a bowl of water while you peel them, and leave them there while you grate them. This will keep their white/pale yellow color.

In a bowl grate the potatoes and onion on the star shaped grater. I suggest starting with the onion as the juice will prevent the potato from turning brown. Just use your fingers to mix it around now and again.

Mix in the flour, egg, and salt until you have a nice pourable consistency. I know it looks thin, but that is what you want. It will bind together quickly once it hits the hot pan.

Heat a pan of oil and scoop in a bit of the potato pancake batter. I aim for about a heaping tablespoon per pancake.

Deruny don’t take that long to cook so flip them after about a minute. You know they are done when they look like the picture above – a nice golden color. Set them on a paper towel lined plate to sop up the excess oil.

How To Make Potato Pancakes In Claypot

As this recipe is often cooked to use up leftover potato pancakes, that’s just what I am doing. All you need other than the already fried pancakes is a bunch of white mushrooms, some butter, salt, pepper, and smetana. Smetana is a classic Eastern European extra rich sour cream, but if you cannot find it regular sour cream will work.

In a pan on medium heat add about 4 tbsp of butter and 500 grams of sliced white mushrooms. This is about 20 large button mushrooms, but if you use more or less it doesn’t matter. Mushrooms are mostly water and will shrink down A LOT.

Note: these pics aren’t representative of the full recipe as I cut it in half. As is tradition, I am using leftover pancakes and just didn’t have so many left.

After your mushrooms are nice and browned add in two cups of smetana or sour cream. It may seem like it does not want to incorporate but just keep stirring and it will.

Once the sauce is rich and creamy lower the heat. Sprinkle in salt and black pepper to taste and stir to combine.

In an oven safe pot (it’s called claypot for a reason) add some mushroom sauce to the bottom. Then layer pancake, sauce, pancake, sauce etc. until you fill up the pot.

Once the potato pancakes and sauce are filled up to the top I like to add a little more sauce to completely cover any pancakes.

Place the deruny in horshchyk in the oven and bake at 200C or 400F for about 10 minutes.

Sprinkle some freshly chopped dill on top of the potato pancakes while still in the claypot or crock and serve. This recipe uses a small crock for a one person serving, but you can make this using a very large claypot and just spoon out servings to a group. 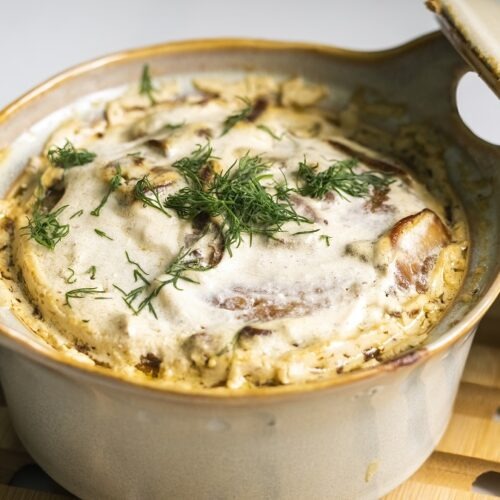 Calories: 720kcal
Did you make this?Mention @CookingToEntertain or tag #cookingtoentertain and let me know how it was! 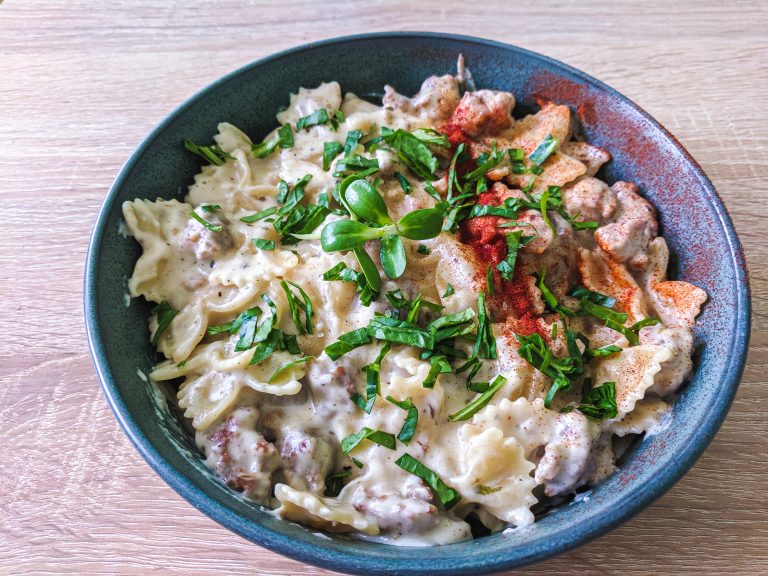 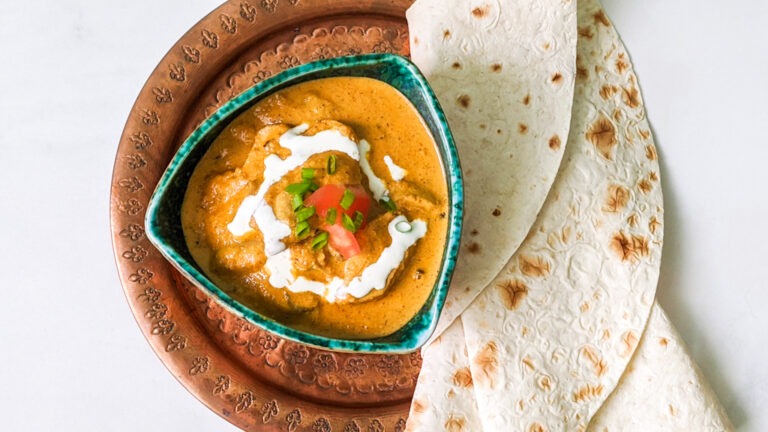 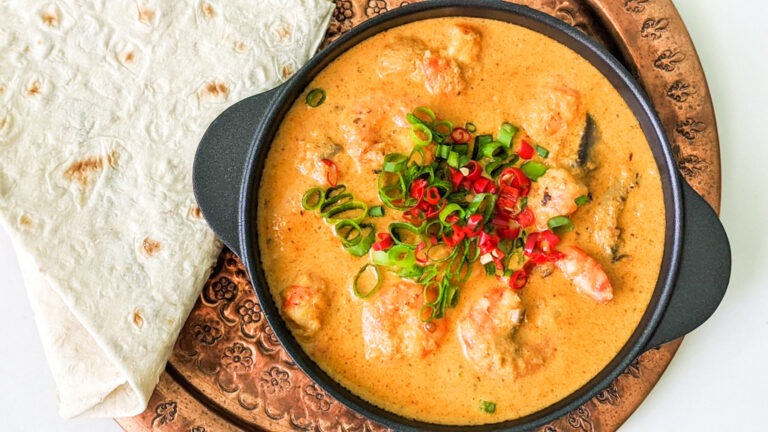