Arctic char is one of those fish you’re likely to see on the menus of fancy restaurants, at least if you ate out a lot in the 90s. However, recently this tasty fish has been making a comeback due to consumers wanting to be more eco-friendly. My recipe for pan seared arctic char is paired with some rice noodles and a pindjur cream sauce!

Like most fish, you’re going to get the most bang for your buck if you purchase a fish whole and butcher it yourself. Don’t worry, I’ll link enough recipes down below so you will use every part of the char and leave nothing to waste. Starting with this pan seared arctic char with vermicelli and a roasted red pepper cream!

What Is Arctic Char?

The easiest way to describe arctic char to someone who has never tried it before is saying it is a blend between salmon and trout. In fact, it reminds me quite a lot of Ohrid trout from North Macedonia, which is also described in a similar way. The flesh of the fish is fatty and flavorful and the skin crisps up wonderfully in a pan. And, just like salmon, filleting this fish is a breeze.

How To Fillet An Arctic Char

Lay the char on it’s side on a cutting board. Take your sharp knife and make a cut following along to “line 1” in the above image. Basically cut from the top of the head, right behind the gills, down to the bottom cut where you took out the guts. Then, start at the tail and with the flat of your knife remove the whole fillet of char. Then flip the fish and do the same on the other side. If you’d prefer to watch a video about it, you can watch Nick DiGiovanni fillet an arctic char quickly and easily.

Now, once you have your fillets, take some tweezers and remove the long belly bones. This may seem difficult, but they come out super easily. Just run your finger down the slab and when you feel a bone, pluck it out. There will be other meat still with the fish carcass. Don’t throw anything away yet (except the previously mentioned fish guts).

I like to mince up the belly and the bone meat for a super tasty and fresh char tartare! To get the meat off the bones just use a little teaspoon and scoop the meat away in the direction of the bones. You can also boil the head and bones for a char stock to make a fish cream soup.

If you have a lot of fish you can always make a fish salad. It’s basically the same method I use for my trout salad, which is just the cooked flaky fish mixed with mayo and a few other ingredients. Perfect between some bread or as a spread for crackers.

Since this recipe is using portioned fillets of arctic char you’ll need to slice your side of fish into serving sizes. I think 4-6 oz is the perfect size, especially since these will be served with vermicelli and vegetables to fill you up. Pat dry the portioned fillets and sprinkle sea salt on both sides.

How To Pan Sear Arctic Char

In my opinion fish is best seared in butter, or at the very least a butter and olive oil mix. In a pan on medium-high heat melt two tablespoons of butter. Once melted take your portions of char and lay them skin side down. Cook for about two minutes, then flip to skin side up and cook another minute to minute and a half. If you want to based the skin after flipping you can do so. Remove from the heat and let rest for a couple minutes.

Sometimes, if I am going full Mediterranean I will only sear in olive oil like with my pan-seared sea bass, so if you don’t want to use butter you CAN use only olive oil. I just love the nuttiness that butter brings to flaky fish when you sear it.

The pan seared arctic char will rest on a bed of vermicelli, which are just rice noodles. These only take about 2 minutes to boil, so you can actually start them after you pull the fish from the pan. Just boil, strain, and plate.

To make things even easier, while the noodles are boiling for a couple minutes you can make the roasted red pepper sauce. Now, what I’m about to tell you may seem like a cheat method since I’m using a jar, but I’ve yet to be able to make a better pindjur than what I can buy. You can use any roasted red pepper sauce, but I’m using a jar of Pindjur that I picked up on a recent trip to North Macedonia. Mix one cup of pindjur with a half cup of heavy cream, pop it in the microwave, and you’ve just saved yourself hours of unnecessary work.

In a shallow bowl ladle down your roasted red pepper sauce, then your vermicelli, and top with two portions of the pan seared arctic char. I also serve this along with some butter sauteed haricot verts but you can mess with the recipe yourself for extra customization. 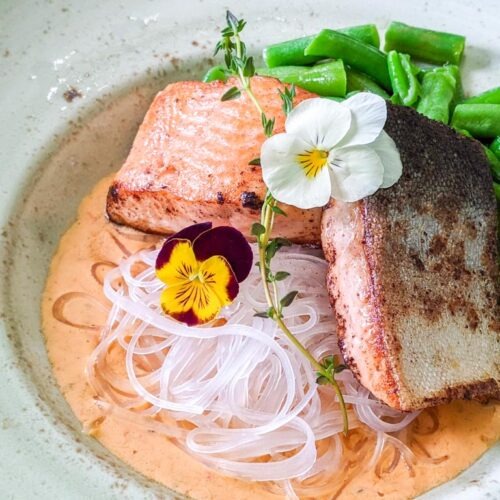 This dish is best eaten right after cooking. If you have fillets that you don’t want to cook right away, wrap them in plastic and store them in your fridge for up to two days. The roasted red pepper cream will hold for about two weeks in the fridge. 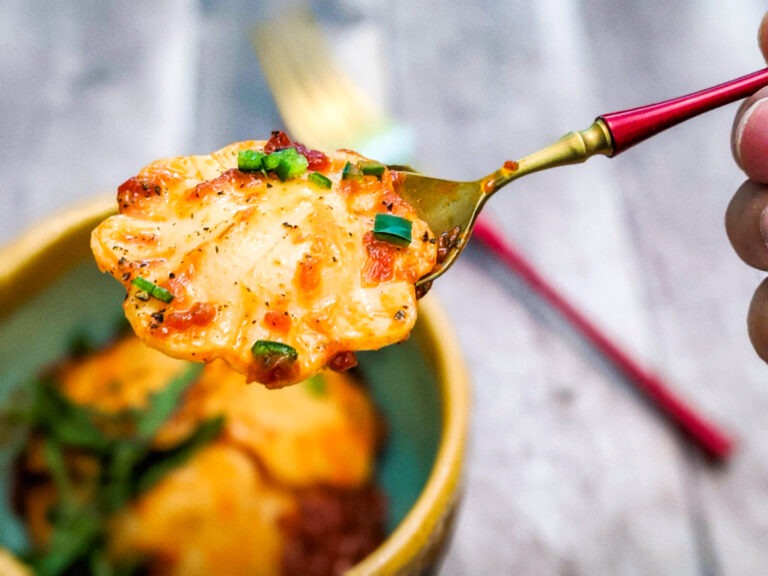 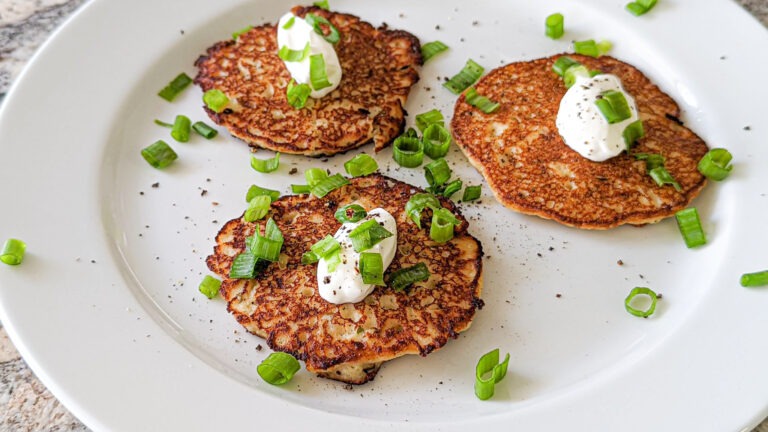 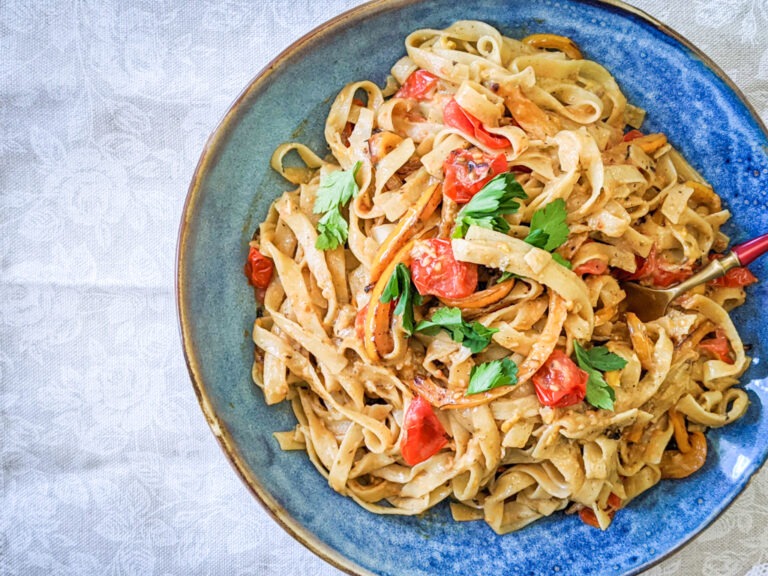