While the name of this dish may sound odd, rabbit in cherry beer, or Lapin á la Kriek, is a popular Belgian dish made of rabbit braised in kriek. This sour cherry lambic beer acts as a great tenderizer for gamey wild rabbit, and creates a well balanced sauce to eat with the meat.

This recipe is very simple, and a great dish to make when having many guests over. This is because it is basically a stew and can be prepared mostly ahead of time. Rabbit is one of my favorite meats to cook and eat and once you learn how to break down a whole rabbit you’ll be making it all the time.

Do I Need A Whole Rabbit?

Rabbit is often sold skinned and gutted, but other than that whole. I would say the head is there about 50% of the time. I’ve already made an easy guide for breaking down a rabbit, so if you are doing it at home you can follow that. Or possibly ask your butcher to do it for you.

Don’t throw the carcass away either. There’s still good meat on there and it is perfect for making rabbit stock for risotto. Your rabbit will have four main parts:

➤ Hind Legs: The rabbit hind legs are the most popular part. They are muscular but flavorful and perfect braised in sauce.

➤ Front Legs: The front legs of a rabbit are much smaller and tougher than the hind legs. I almost always use them in stews, but if prepared correctly they can be fried just like chicken wings!

➤ Saddle: The saddle of rabbit is the tenderloin shaped piece of meat that goes down each side of the spine from ribcage base to tail. It can be cooked a variety of ways, but I like to sear it and serve it atop pasta.

➤ Flap: The flap of a rabbit can be considered the belly meat, although there really isn’t that much of it. It is a thin piece of meat that covers the internal organs and is connected to the saddle. Usually you get two since the rabbit is sliced down the belly to remove the organs when cleaning.

I also recommend not throwing away the offal, or innards, as they can be cooked and eaten as well. I save up all my rabbit livers in the freezer until I have about 8-10 and then I make pashtet, a Ukrainian pate. The kidneys can be fried and eaten whole, same as the heart – although I tend to give that to my cat as she goes wild for rabbit heart and I just cannot deprive her of that pleasure.

After butchering your rabbit place all the meat pieces in a pot or Dutch oven. Pour over 500 ml of Kriek beer. This is a sour cherry lambic style beer that you can find easily in Europe, or at quality liquor stores around the world.

To the pot add a teaspoon of salt, a teaspoon of freshly cracked black pepper, one cinnamon stick flaked apart (real ceylon cinnamon, not the fake hard as a rock cinnamon you can’t rip like paper), a teaspoon of cumin, 2 bay leaves, and six cloves of garlic peeled and halved.

Place the lid on the pot and put into the fridge to marinate for at least six hours, but it’s even better overnight. If I make this for a group I start the day before so the meat is extremely tender.

When you are ready to make the Lapin á la Kriek remove the rabbit from the marinade. Do not throw away the liquid! Strain it through a fine mesh strainer as the marinade actually becomes the braising liquid – how great is that!

Melt a few tablespoons of butter in a frying pan and lightly dust your rabbit meat with flour. Fry the meat for about 2 minutes per side – just long enough to brown the outside. The smaller pieces will take less time so watch accordingly.

To make the Lapin á la Kriek add the browned rabbit pieces to a dutch oven and pour over the strained braising liquid. I like to re-add the large chunks of garlic as well, but that’s a personal preference. At this point also add in a few sprigs of thyme. Bring the pot to a boil then immediately reduce to the lowest heat setting. Place the lid atop and let braise for 1 hour 10 minutes.

After 1 hour 10 minutes add in about a half a cup of jam. Traditionally one would use cherry jam, but I had homemade blackcurrant jam which I think made it even better. I have made it with both jams though and it will be tasty either way. Also add in a couple peeled and halved shallots. This imparts some flavor to the sauce, but mostly acts as a side along with the boiled potato.

Braise for another 20 minutes (here you can make the boiled potatoes or other side dishes) and then turn off the heat. Remove and discard the thyme. Remove the shallot carefully to a plate and place your rabbit meat on the plates that you will serve them. Turn back on the heat and whisk in a bit of flour to thicken the sauce. Spoon it over the plated rabbit and garnish with a fresh sprig of thyme.

As this is a Belgian dish, the proper side dish is probably fries, but I think any potato works. I just did a simple boiled potato but with the delicious kriek sauce some rich whipped potatoes would be just divine. 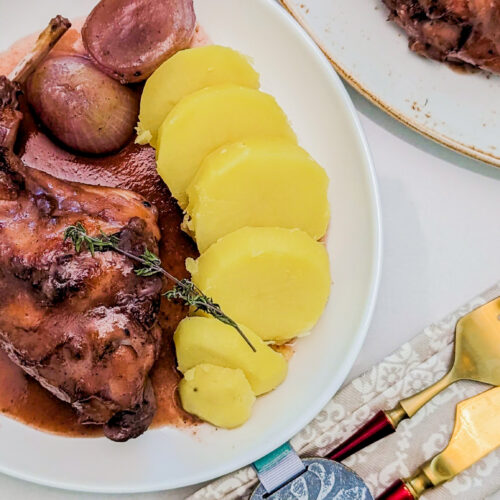 Serving: 100g | Calories: 165kcal
Did you make this?Mention @CookingToEntertain or tag #cookingtoentertain and let me know how it was! 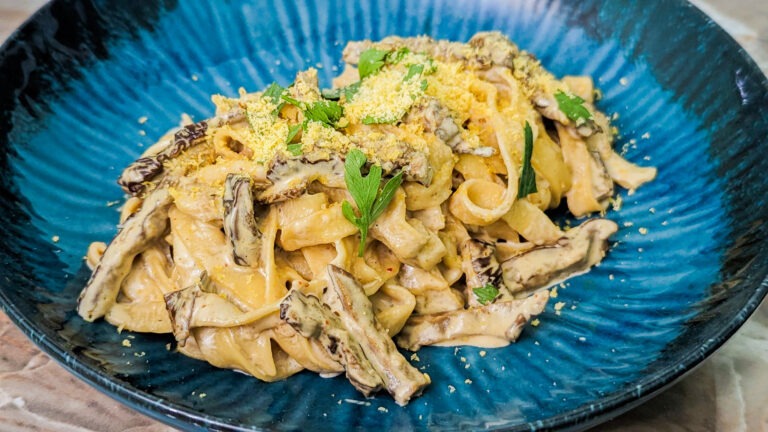 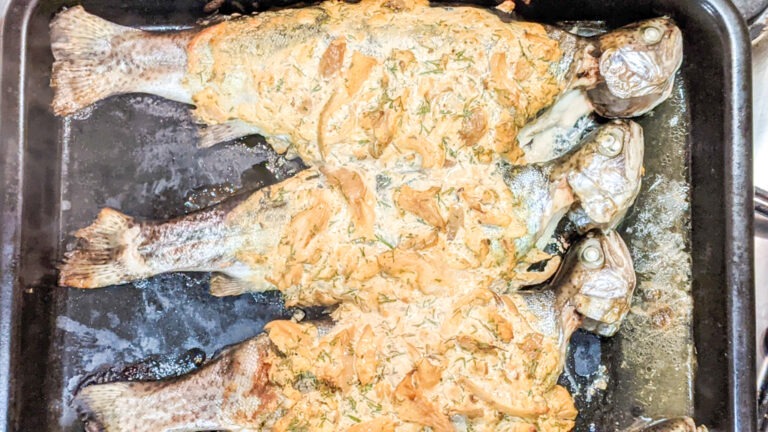 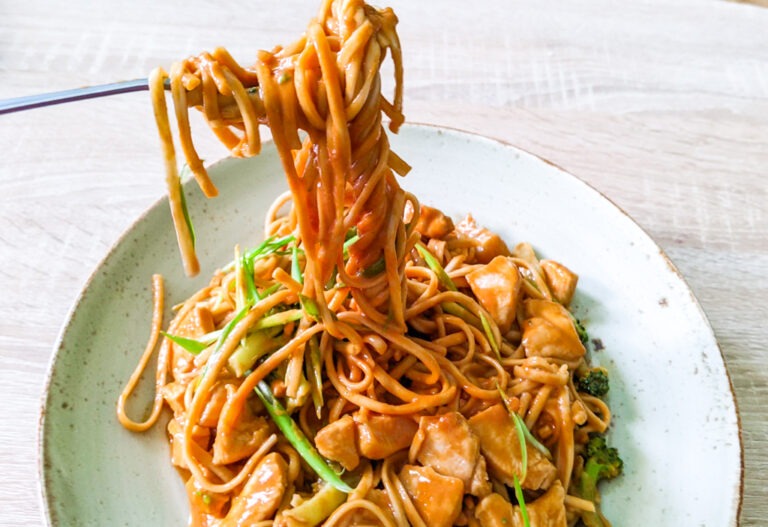